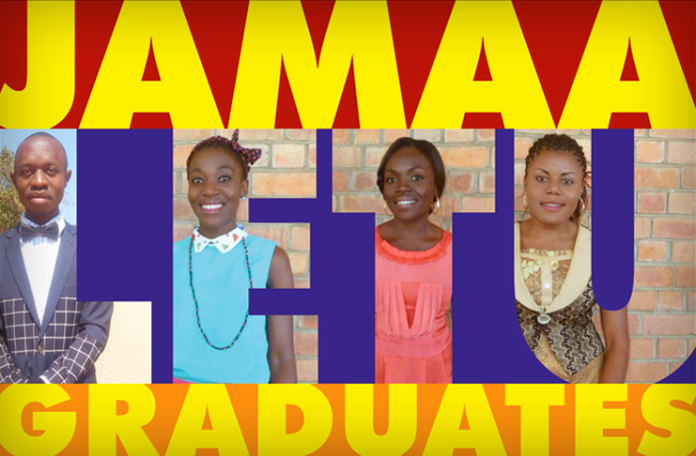 Former residents of the Jamaa Letu Orphanages graduated recently from universities. This brings the total to five graduates. These young adults have flourished in the academic world and now have degrees that have prepared them for employment and other adult responsibilities.

Last June, Idris Belinga graduated from Africa University in Zimbabwe, which serves as the flagship United Methodist-related university in sub-Saharan Africa, supported by apportionments. Belinga’s education was funded entirely by a sponsor from New Jersey. He studied management and medical subjects. He hopes to find employment in administration or as a manager of a clinic or hospital in the Congo. His sister Ruth lives at Jamaa Letu.

Zango Mungole graduated from Katanga Methodist University in Mulungwishi. KMU is The United Methodist University located about two hours from Lubumbashi where the orphanages are located. Mungole earned a degree in computer network engineering. He will be working on a Cisco Training Study Certificate in network administration while looking for permanent employment in his field.

Cecile Kalubi graduated a year ago from the state university in Lubumbashi with a degree in law. Because of the political uncertainties in the Congo and protectionism attitudes among lawyers, the bar exam has not been scheduled. She recently had an internship in law. She is living with a relative In Lubumbashi.

Claudine ‘Blessing’ Nyota, the first college graduate, was married on July 8 to Dillon Guyo. The JLO Board of Trustees filled the role of family. The photos show a beautiful and beaming bride, a handsome and smiling groom. They are both employed full-time as teachers at TESOL, The English School of Lubumbashi, a United Methodist School. She continues her work with an agricultural program for a village with little recent history of farming healthy and profitable food products.

Blessing now has a blog where those who are interested can follow her as she works on the nutrition project she is developing.

You can also watch a video of Blessing address the 2016 Pacific Northwest Annual Conference below.

We rejoice with these young people who have succeeded in their studies and are now looking forward to their next stage of life. We have great pride in them!